Everyone loves a bit of colouring in. As a dyslexic English student I developed my own coping methods when writing notes, planning essays and internalising language during my A Levels and later, during my degree. I personally find colours to be vital to my own learning; even now I read with a pink layover and have a colour coded system in my own notes and lesson planning. Images and colours work beautifully as part of English lessons because, at its heart, English is a highly conceptual subject where students need an understanding of abstract theories as well as a strong sense of structure in their own writing (structure; the great intangible elephant in the room). Images, symbols, doodles, colours and shapes have been the basis of some brilliant activities in my lessons and I am certain that many of these principles will apply equally well in other subjects too.

My classroom is a felt tips, sugar paper, cutting and sticking zone. However, you do not need tons of fancy art resources to make these activities work. In true Blue Peter style, all you will need is…

Felt tips OR colouring pencils OR highlighters (in fact, as long as the kids have around four different coloured writing implements of any kind then that’s fine. Many of them will have their own…)

A5 paper (cut some A4 in half…)
A4 or A3 paper (up to you – A3 is my preference, but for some kids, being presented with that much empty page is a little daunting…)

Activity 1: Images of Images – Map Out a Poem

Being able to recognise and understand imagery in literature is a skill which we spend a lot of time trying to teach. This activity is very simple. I take a poem and split it up into lines, giving each student their own to work on. They then draw a picture of the image described in the line.

For example, here are some images drawn by some Year 13 students of the Sylvia Plath poem, Resolve

“A milk film blurs the empty bottles on the windowsill”

“And the coal fire burns” 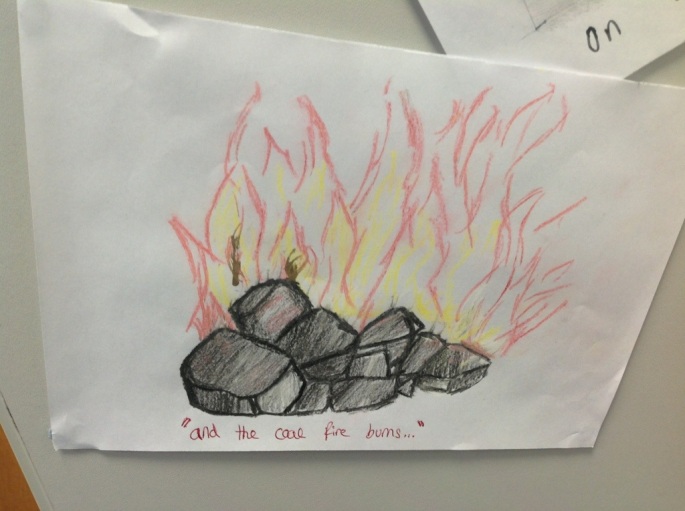 All of these images, though they are simple, serve to highlight the very domestic scene presented in this poem, which, during this lesson, allowed the students to hit upon the feeling of of claustrophobia and the sense that the speaker has stagnated. The “empty milk bottles” in particular have appeared in a number of essays since!

Very similar to the idea above, but students cover an A3 sheet in lots of images and significant words from a poetry or prose text. One way of doing this is to play an audio or video version of a text and have a lovely time sitting and listening while the students (and you… I find colouring in very relaxing…) draw the images which jump out at them. I like to use the Simon Armitage poem, Out of the Blue, and there’s a brilliant reading by Rufus Sewell on YouTube (here) which is incredibly evocative. My students have produced some fantastic image collages using this poem, and it helps them to understand imagery such as “dragon’s tongue licking fire”, “awful snow”, and “an oak leaf, pressed and dried”, which are usually quite abstract.

A similar use of this idea is to print a poem in the middle of an A3 sheet and ask students to draw four of the images around the edge. Here are a couple of examples from Wordsworth’s Upon Westminster Bridge…

This activity aims to focus the students on the reality that an image in a poem or story was inspired by a real scene, object or person. I am always trying to get my students to see the duality of imagery; that 1. there was an original image which inspired a poetic one, e.g. Shakespeare’s mistress with eyes “nothing like the sun” may have been a real woman so, what did she look like? Was she some faded woman, past her prime? Or that 2. There is an entirely new image which is probably nothing like the original inspiration for the line. This image is created by the mind of the reader, informed by their own interpretation of the language, their own unique experiences and the way in which they might put an image in context. For example, this line might say to me that her eyes are dull and bereft of life.

In order that students grasp this idea, I ask them first to draw (or describe in writing…) what this image makes them think of when they see it in isolation, without the rest of the poem or any kind of context. We then look at some of the students’ ideas and discuss why the line makes us think of these things. Then, I give the students the rest of the poem and discuss the context, encouraging the students to think about why the poet might have written this line and the real life person, place or object which might have inspired it. Students then draw a second image which we call “getting back to the original”. By the end, they have two, often very different, images. Looking at these reinforces that old English teacher mantra: “there is no right answer, literature is all about interpretation”. They begin to understand that literature is both based in reality and open to alternative and ever evolving readings.

For me, the best thing about drawing in lessons is that it forces a sort of close analysis of language before students have even begun to write about it. I always follow these activities up with some kind of writing or detailed note taking. These always make great displays which will constantly reinforce the key themes of a text as the students see them again and again. The pictures could also form a really attractive cover for folders or exercise books.

To follow – colours and flash cards; how they help me order my brain…